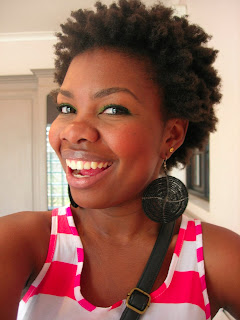 The eighth month after I chopped my hair flew by so quickly. It was the end of the year, I was in full swing of working full time and I also flew back home to Tanzania. The last time I’d done that, I’d been 3 months in and experienced my worst time of being natural. People had never seen me with such short hair and it was so different to the longer relaxed hair or weave they were used to and was overloaded with comments about my weight. Not going to go into that again but suffice to say, it was horrible. This time, I went to Dar prepared. Plus, Fro and I had started to become friends and I wrote this review. I was getting used to what needed to be done and had already experimented with different styles. I knew that it would be a good idea to get a protective style in there as it’s so such more affordable to do. And that’s what I did. This time it wasn’t because I felt so shitty about how I looked but because I knew it would be beneficial to my hair’s health to give it a break. I did a weave & braids combo but only kept it in for three weeks as I was missing Fro so much. What I definitely learned that month was that people’s perceptions of you and comments of your looks really does get influenced by how secure you’re feeling about yourself. And I felt quite hot with my baby fro growing in nicely thank you very much.

Next timeline post: Being Natural – 9 Months In (1 year’s of growth)