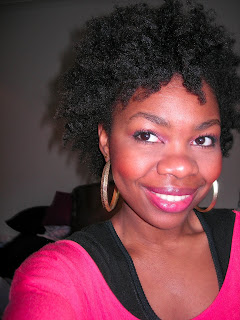 Whilst surfing NatSun the other day, I came across this video
and I realised this was me too! I’m a year down the line, my hair has
grown incredibly and whilst I’m happy with the length, I want more! I
feel like it’s not as easy going as when I first cut it or the couple
months afterwards and it’s not long enough yet to braid a few big braids
to go to sleep in. I still have to braid about 12 or so mabutu before
going to bed. I’m wary about doing flat twists now cos my hair just ends
up sticking up and looking so uncurly. I’ve got length, and that’s the
most apparent when I blow dry it which I’m very tempted to do on wash
day now cos going back to shorter looking hair is not appealing to me.
It’s like I’m impatient to finally get to a length that’s like “WOAH!”
without stretching it so much. The way my hair is so tight, I don’t know
if that will ever happen. When my hair is wet, it’s coily and springy
but of course it looks shorter than it actually is. To be honest, I’m
not too sure what to do at this point, other than braiding or weaving
for a bit. I undid my chunky braids yesterday, after two weeks.
Unfortunately, those braids have a short lifespan. But in doing them, I
realised my new found appreciation for braids, especially with being so
busy at work. For a few weeks, I didn’t stress about my hair, or think
about how I’m going to wear it until I was in front of the mirror doing
it. So I think I’d like to continue doing braids, while giving my fro a
break in between. With it being winter, I want to keep those breaks as
short as possible. Question is, what do I do with my hair while it’s
out?

I think I’m feeling uninspired and at the same time concerned for my
fro. I’m uninspired cos I have tried quite a few hairstyles, as many as
my hair would allow and I don’t seem to be seeing many new ones out
there that are like DAMN. It’s more like envying someone’s texture or
length, that their hair looks so curly and bouncy. So I think in a way I
want to get to that point where I can achieve that look. I used to get
it by doing flat twists but now my hair doesn’t seem to be cool with
that. Then for awhile the mabutu thing was working and technically still
does but it’s not a sure bet every time. Yesterday, after washing and
DCing my hair, I told myself I’d finally tried doing an actual twist
out. So I got my spritz and my lemon butter, a bit of gel and
started…and failed…miserably. I don’t know what happened. I thought
it was going to be easy but my hair just didn’t hold…at all! So I
ended up doing old faithful. Then this morning I just undid them and
left my fro out. I’m getting worried for my edges because the only
styles I seem to love on me require me to pull the sides or back in a
way. So I’m worried about doing that a lot. I’m also concerned about the
blow drying thing. I haven’t decided to actually do it regularly yet
but my hair just seems to look better after I do a braid out when I’ve
blow dried it. Sigh, I don’t know. The problem is this: I want to gain
more length but I know that takes times, and a certain amount of
protecting. I also what to give my hair breaks in between but still
style it awesomely when it’s out. Now I feel it’s at an awkward stage
where some things work and a lot of others don’t. Now my braid outs
look…well spikey if it’s not blow dried before. And for the first time
this whole year, for a second, I thought about the ease of having my
hair chopped off. It really was wash and go. I know that I don’t wan tot
go backwards but I’m feeling just stuck at the mo. :S