It’s been a lil’ quiet…not much is going on with my hair at the moment but quite a bit did a few weeks ago. Nothing’s been ‘worthy’ enough of a full blog post so thoughts have been gathered into this little jumble of a post, lol. 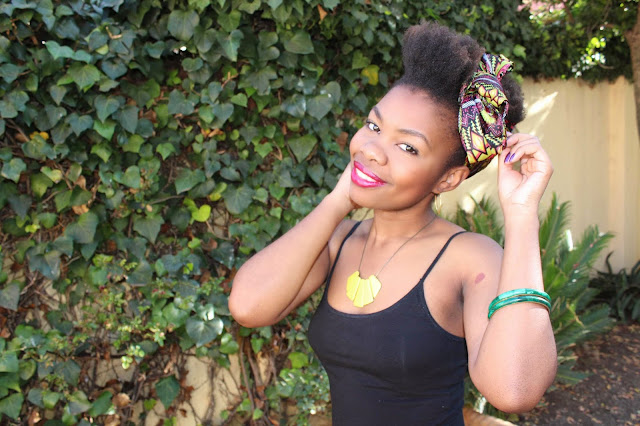 I mainly wanted to write about my experiment in going all natural with my hair products, which I’ll embarrassingly admit, has subsequently failed. Hmppff. Before I started that challenge, I was so excited. I hadn’t been that excited with my hair journey in awhile. I went all out and did research on all natural recipes, bought a whole bunch of the ingredients and told every woman at work about it. I even set up blog posts to take you through each recipe and the benefits of the ingredients. My friend told me she’d like to see how I go through it first, especially the no shampooing bit, before she also jumped on that wagon. Well, the wagon never really left the station…

The first mix I made was a cocoa butter based hair butter. It was supposed to be a fluffy, whipped, thick lotion type product for me to smooth onto my hair and scalp. It included coconut oil and castor oil amongst other goodies. I was in the kitchen for about an hour trying to get this thing right. And just when I thought I did, the next morning the mix had hardened to one big yellow rock. This is the #epicfail I mentioned on my Facebook page about a month ago. I felt disheartened but decided to try it again that evening. I also mixed up some flaxseed gel and a conditioner-less daily spritz. Those were pretty easy to do. I popped them in the fridge and went about my day. That evening, after reading more tips online, I re-did the cocoa butter mix adding more oils to make it softer. Again, thinking I’d managed to save it, I checked on it the following day and there it was again – the hard yellow rock. I couldn’t use it on my hair the way I’d wanted to. I had to pry it out of the jar, warm and soften it in my hands first before applying it, which added to the time it took for me to get ready in the mornings. It was not working. I haven’t chucked it out, I have re-purposed it as a body butter.

The next fail was my flaxseed gel. Firstly, the consistency was ummm…well, more slimy than gel-like. And it didn’t really give me the hold that I like gel to. I decided to stick it out anyways. I don’t normally use gel everyday, more like twice a week so by the second time I grabbed the jar out of the fridge…it smelled funny…and had mould in it. Yeah. This is after it being there for only about 4 days. Sigh. So that evening I made another mix of smaller quantity this time and tried to boil it for longer to make it thicker. It was still slimy and after forgetting the jar on my vanity counter for one night, it went off. But I only realised that it was off the next morning when I was in a rush and my uncooperating hair didn’t want to do anything but be put in a puff. In the rush and panic of things, I reached for my store-bought gel and slapped that on. That’s when the experiment was over. Don’t even get me started on the clay wash that left my hair dry and brittle. Looking back, I don’t regret at least trying for the couple of weeks that I did. And I also don’t take back what I said about how God wouldn’t have put us here without the tools to care for ourselves. I still believe that, but I’m currently not prepared (time and energy-wise) to have an all natural regimen. I found it time consuming and draining. I’m sad it didn’t work out for me now but I’m open to trying it again and fully give it a go at a later stage in my life.

So here are a few photos of what my
hair’s been up to the past few weeks. 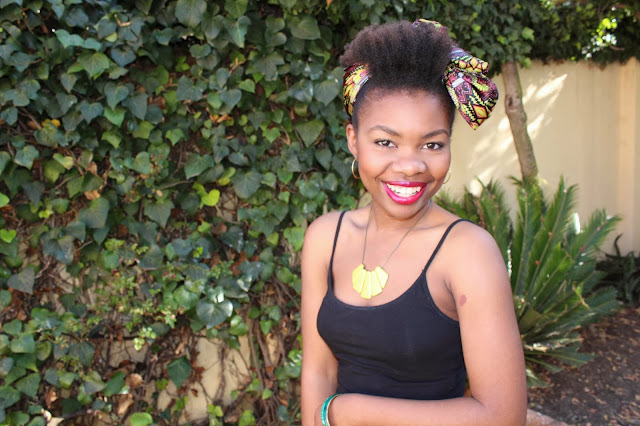 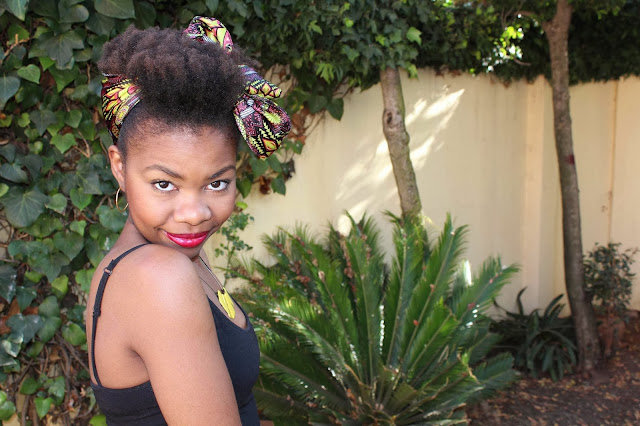 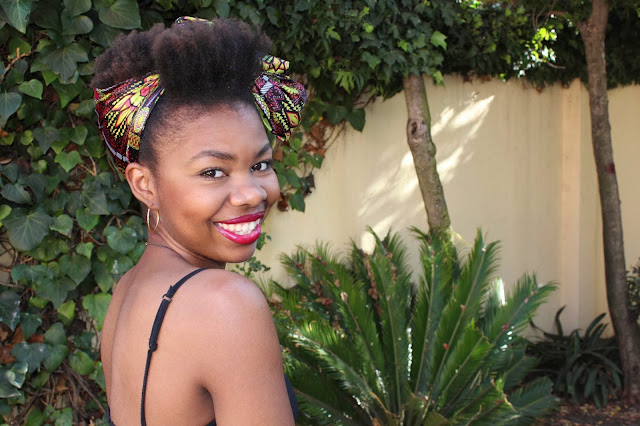 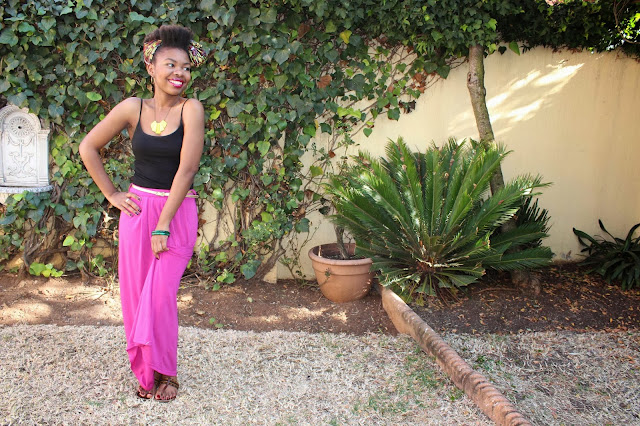 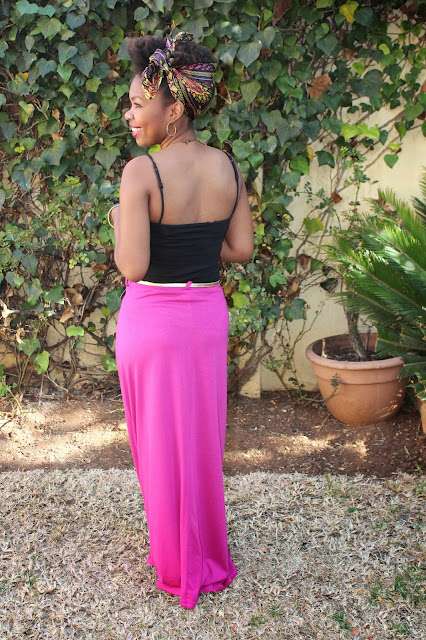 Since I’ve cut it, it’s like it’s a
different beast. It feels drier so I’m moisturising it more often, but
it also feels incredibly strong. As I mentioned in my previous post, I’m
no longer pulling out chunks of hair and it’s not stringey at all. I am
however re-learning to deal with my hair at this length. Yet this time,
I think because I’ve been here before, I’ve decided to try braiding it
for a couple of weeks at a time. Earlier this year, I moved house and
despite trying to continue to take care of my hair the way I used to,
I’ve realised I just can’t. From me battling with length retention and
damaged hair to also just not having as much time on my hands.

I’m currently trying to do mini protective styles. I’m loving how my hair is at the moment: 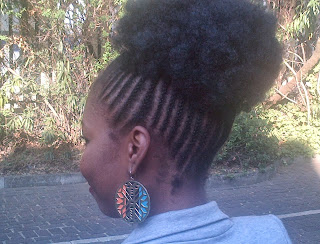 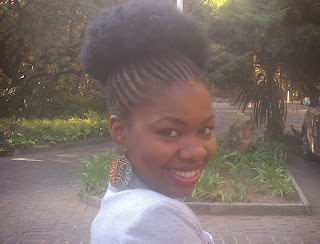 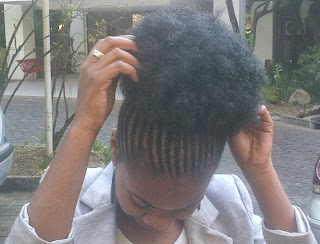 I got the cornrows done at a local salon and prepped it myself. The hairdresser was quick and she did them neatly although, way too tightly. But I only felt the pain two days after she did the hair. It was so torturous, I’ve had to undo the center where the ‘rows meet to give my scalp a break. It was only then that it clicked, this is why many women lose hair. Next time, I’ll be sure to tell her not to do it so tightly. It’s so unnecessary. Anyways, I bought the ponytail from downtown Joburg for R45. I’d seen so many women walking around with them and after asking several of them, they all said they got them from town so I trekked on over to Brie Street to find me some et voila! Not sure how long the style will last for, but as usual it’s giving me a welcomed extra 15 minutes in the morning 🙂

So, that’s me really. Phew. Glad to get some of that stuff off my chest!